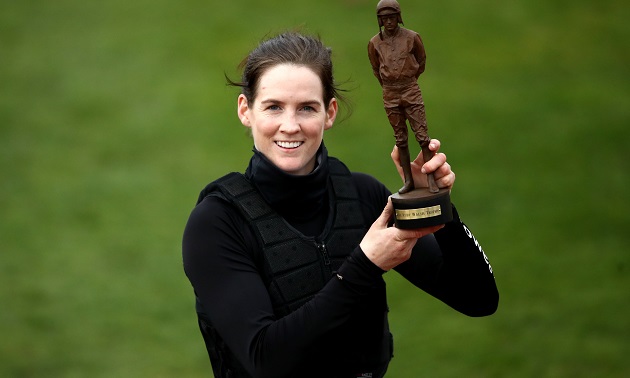 A stunning week for Rachael Blackmore at the Cheltenham Festival was completed on Friday as she became the first woman to secure the coveted top jockeys’ award.

Six wins – including a history-making victory aboard Honeysuckle in the Champion Hurdle on Tuesday – have seen the 31-year-old rocket to the summit of the sport, earning plaudits from the likes of Sir Anthony McCoy and Ruby Walsh.

Her final afternoon started in a similar vein to the previous three days, as she steered the Henry de Bromhead-trained Quilixios to victory in the JCB Triumph Hurdle – and it so nearly climaxed with glory in the Gold Cup through A Plus Tard, who found only stablemate Minella Indo too good.

Blackmore, 31, was presented with her trophy by Sir Anthony McCoy.

She said: “It’s unbelievable [to be leading rider]. I share a house with Patrick Mullins and he’s got a McCoy trophy, so we’re now going to have both AP McCoy and Ruby Walsh on the mantlepiece!

“It’s phenomenal. I can’t even comprehend being leading rider in Cheltenham. Getting an award from AP McCoy in the shape of Ruby Walsh – that’s crazy!

“It’s been a brilliant week. Henry de Bromhead is just an incredible trainer and I’m just part of that team and getting on those horses.

“Honeysuckle is definitely the standout moment of the week for me. She’s extremely special and was phenomenal in the Champion Hurdle – and I got a great thrill off Allaho [in the Ryanair Chase].

“I just walked into the weighing room there and saw my mother on ITV – I don’t know how that happened!

“It’s a shame my family can’t be here, but it’s the same for everyone. I hope everyone at home has texted WellChild and donated – those are the things in life that really matter.

“I was hoping I’d get one winner – every jockey thinks like that. When you get one, it’s some weight off your shoulders and everything is a bonus then after that.”

Asked if it will change her life, she said: “I’m still in the bubble of it now. I don’t know what’s going to happen.”

On the Gold Cup, she added: “My mask was up after the race, so you couldn’t see my expression!

“I’m delighted for Henry and the team – they’ve had some week. I rode the wrong one, (but) I can’t complain too much.”

“The amount of support she’s getting locally, my phone has literally melted. I understand that she won the first race, so my husband Charles is just wondering. He needs a new JCB – is there a lovely smart one there? She might treat him to it.

“I avoid watching it when I can. It’s very hard when it’s your own child. When I’m home here and I’m not in work I will maybe watch the last three fences or whatever.

“She was always very keen and she was competitive with her older brother, anything that he jumped, she wanted to jump.

“I’m extremely proud of what she has done, it’s wonderful when you look at the sponsors of the main race, WellChild. I feel privileged that’s she’s so well to be able to do what she’s doing. I feel immensely proud of the fact that she’s given people a bit of a lift at this awful time.

“For those reasons, I’m proud.”

De Bromhead was denied top trainer honours by Willie Mullins on countback, after both had six winners, although having become the first trainer to win the Champion Hurdle, Champion Chase and Gold Cup in the same week, he is unlikely to be too downcast.

Paying his tribute to Blackmore, he said: “We all know how good Rachael is and we feel lucky to have her on our team. She’s riding out of her skin.

“Eddie O’Leary (Gigginstown House Stud racing manager) recommended her to me about three years ago. We said we’d try it out on the Gigginstown horses and within two or three months she was riding all of ours.

“She’s a good person, works really hard and is a brilliant rider.”