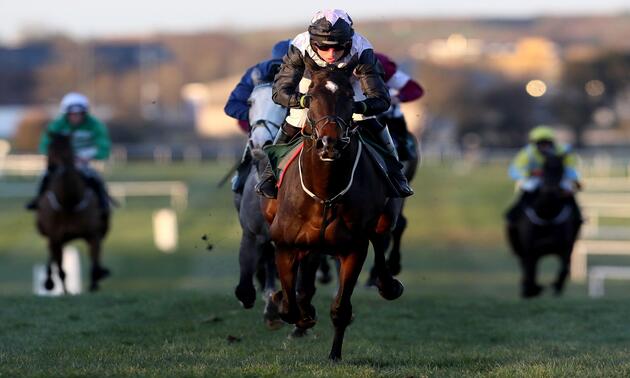 Andrew Asquith looks ahead to the 2023 Brown Advisory Novices' Chase and picks out his best ante-post bet.

The Brown Advisory Novices' Chase market will potentially look a lot different come the day as Gaillard du Mesnil, who currently heads the betting, is likely to go for the National Hunt Chase, while several others aren't guaranteed runners, either.

Therefore, the Gordon Elliott-trained Gerri Colombe looks a good bet at this stage at 7/1. He remains unbeaten under Rules, winning a couple of bumpers in 2020/21 and two races over hurdles last season, and he has continued to look a very exciting prospect over fences.

Gerri Colombe was very assured when making a winning start over fences in a maiden over two miles and five furlongs at Fairyhouse in November, ridden prominently and impressing with the accuracy of his jumping. He quickened clear between the last two fences in grand style to beat another promising sort by two and three quarter lengths with a bit in hand.

As expected, he improved a chunk when following up in the Grade 1 Faugheen Novices' Chase at Limerick last time, again his jumping one of the standout aspects, and he found plenty in the closing stages to go clear on the run-in. That race was run in testing conditions, placing the emphasis on stamina, and he left the impression he will be seen in an even better light once tackling three miles. Gerri Colombe typically holds entries in all of the novice races at the Festival but he looks tailormade for this, with the Turners over shorter likely to prove too much of a speed test on what will likely be better ground, while he strikes as a horse who has a touch too much class for the National Hunt Chase. Gerri Colombe will be a much shorter price on the day if taking his chance here and 7/1 looks big enough to get involved now.

One horse who most people wouldn't have had on their mind for a novice chase at the Cheltenham Festival a couple of months ago is The Real Whacker, but he has quickly developed into a very smart chaser and won both of his starts at Cheltenham.

He is another who was lightly raced over hurdles, but he is every inch a chaser on looks, and made a big impression when making a winning start over fences over the same course and distance as the Broadway in November. The switch to more positive tactics seemed to help him and his attitude at the finish proved the difference as he kept pulling out more when the two fancied horses came to challenge him.

The Real Whacker again wasn't fancied in the betting when following up in the Dipper Novices' Chase last time, but he produced one of the best performances at around two and a half miles by a novice chaser so far this season. The drop back in trip didn't bother him and his fast and accurate jumping proved one of his biggest assets, especially for one with so little experience. He again beat the right horses who had no excuses and he is clearly a horse to be positive about moving forward. His price continues to contract, however, and while he is reportedly more likely to take in this race, whether he will be much shorter than 6/1 on the day remains in question.

Thyme Hill is another to add into the mix following his wide-margin win in the Kauto Star Novices' Chase at Kempton on Boxing Day. He has come to chasing quite late, but he was a Grade 1 winner over hurdles, and has improved with each start over fences. He landed the odds in a weak race on his chase debut at Exeter in November but his jumping let him down in the John Francome Novices' Chase at Newbury on his next start where he was put in his place by McFabulous. However, he comprehensively reversed that form at Kempton over Christmas in first-time cheekpieces, the headgear seeming to sharpen him up and he relished the emphasis on stamina. That effort gives him a big shout and he commands respect, for all he probably doesn't have the same scope for improvement as some.

Ballygrifincottage also looked very promising when making a winning start over fences at Haydock in November. Another lightly-raced sort over hurdles, he looked all about stamina when finishing fourth in the Albert Bartlett last year, and immediately bettered his hurdles form at the first attempt over fences. He was in receipt of 8 lb but gave one who had shown plenty over fences an 11-length beating in the style of a horse who can make an impact in the top novice races this season. He hasn't been seen since, but Dan Skelton is keen not to rush him, and this is the only entry he has received at the Cheltenham Festival. He shouldn't be underestimated.

Galia des Liteaux is another who has been entered by Skelton and she has also made a bright start over fences. She proved her effort in the Kauto Star Novices' Chase to be a blip when running out an impressive winner of the Grade 2 Hampton Novices' Chase at Warwick earlier this month, her bold-jumping, front-running style putting all of her rivals in trouble from some way out. She is clearly held in high regard and will be a danger to all with her 7 lb sex allowance if connections decide to take on the boys again and not drop back in trip for the Mares' Novice Chase.

One more to put into the reckoning from Ireland is Gentlemansgame, who was a smart staying hurdler last season, but has the potential to make up into a much better chaser. He was a winner in points and looked well above average when winning a good-looking maiden chase at Leopardstown last month, beating I Am Maximus by eight lengths. Gentlemansgame was much superior to his rivals, but the race did fall apart somewhat, and he will likely be seen to better effect in a more truly-run race. He is entered at the Dublin Festival and he could develop into a player for this with more experience under his belt (he is in the same ownership as Gerri Colombe).