2023 Cheltenham Gold Cup preview: Galopin can be a major force next season 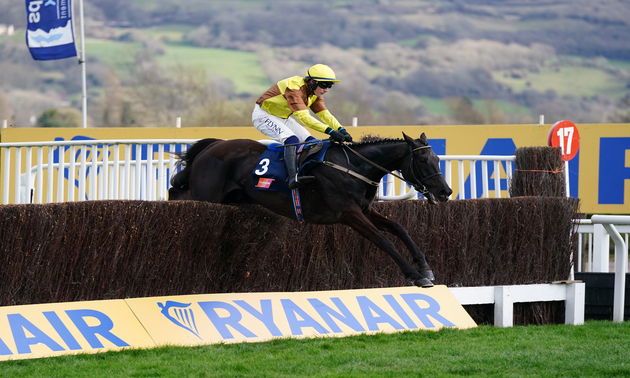 Andrew Asquith takes a long-range look at the 2023 Cheltenham Gold Cup and expects a top-class prospect to step up to the plate.

The 2022 Cheltenham Gold Cup was only really missing the Irish Gold Cup winner, Conflated, and it looked an open contest beforehand as there wasn’t a whole lot between the pick of the field on their best form, but A Plus Tard proved himself in a different league to his rivals in the closing stages, impressively stretching 15 lengths clear of Minella Indo, his conqueror 12 months earlier.

That was the widest winning margin in the Gold Cup since Master Oats won by the same distance in much more testing conditions in 1995, and the best performance in the race since Don Cossack’s victory in 2016. It also rightly puts A Plus Tard at the top of the pecking order of the current crop of staying chasers and the résumé he is building really is hard to argue with.

Whether he is as superior to his stablemate Minella Indo as the winning margin suggests is still up for debate, as the runner-up finished tamely after making his move to win the race on the home turn, and trainer Henry de Bromhead was a little surprised by his finishing effort when asked in a post-race interview.

Still, A Plus Tard is a very classy horse who clearly stays well, too, and he sets quite a high bar for his rivals to aim at next season. With that in mind, odds of around 4/1 look fair enough at this stage for a horse who doesn’t seem to have many chinks in his armour.

There will be some new kids on the block in 12 months’ time, though, notably unbeaten chasers L’Homme Presse and Stattler and potentially the most exciting of them all, Galopin des Champs.

The last-named found himself up against a misfiring Bob Olinger in the Turners Novices’ Chase as it turned out, but still put his name alongside the likes of Goshen and Annie Power as recent Cheltenham Festival 'certainties' who were left with nothing to show for it after crumpling on landing after jumping the last.

Galopin des Champs jumped superbly otherwise and is cleary a novice chaser right out of the top drawer and, for all he displayed plenty of speed over the two-and-a-half mile trip, Willie Mullins has Allaho for the Ryanair, and is reportedly coming round to the idea of making Galopin des Champs into a Gold Cup horse for next year. A winner over three miles at Grade 1 level over hurdles, he has the potential to stay the longer trip, and he will be a most intriguing addition to the ranks.

L’Homme Presse has done nothing but improve all season, winning all five of his starts over fences and notching two Grade 1s in the process. His jumping was impeccable in the Brown Advisory Novices’ Chase and he relished his first try at three miles in what were testing conditions, his strength at the line suggesting he will relish stepping up further in the Gold Cup.

L’Homme Presse will need to take another step up the ladder next year to have a viable chance of mixing it with the principal Gold Cup contenders, but he is totally unexposed as a stayer, and has done nothing wrong so far, so it isn’t out of the question that he can bridge the gap.

Stattler ran out an impressive winner of the National Hunt Chase, running to a high level on Timeform ratings, and recording a figure much better than the five-year average, though it wasn’t a deep renewal, and a slow pace on good ground definitely suited him. Stattler had more speed than his main rival once the tempo quickened, and that ultimately proved the difference. However, he would have likely been very competitive in the Brown Advisory on that running, and he is another horse that has the potential to improve further next season.

Both Galopin des Champs and Stattler are two interesting contenders for Willie Mullins, but the forgotten horse may be stablemate Monkfish, who was prominent in the betting for this year’s Gold Cup before being ruled out for the season through injury in September.

He is a two-time Cheltenham Festival winner and his sole defeat over fences came at the expense of a high-class mare on his final start at Punchestown, though he is best not judged too harshly on that loss, as he made a terrible mistake three from home when beginning to close down the leader. Monkfish is another relatively unexposed chaser and provides more depth to what should be a cracking edition of National Hunt’s Blue Riband in 12 months time.

The aforementioned Bob Olinger indeed made it three from three over fences in the Turners, though it was a very fortuitous victory and his performance left more question marks rather than acting as a further step closer to the top of the chasing tree.

His jumping, not for the first time, didn’t look assured and he held his head awkwardly (hasn’t done this previously) when coming under pressure, maybe suggesting he had some sort of physical problem. Bob Olinger needs to iron out those flaws if he's to scale the expected heights in open company next season, and perhaps reinventing him as a hurdler is the right long-term move.

In summary, the 2023 Cheltenham Gold Cup has all the ingredients to be a cracking renewal, and choosing a bet at this stage isn’t an easy task. However, Galopin des Champs has the ability to develop into a real top notcher, and a cautious bet at a top price of 5/1 may be the way to go.