The Novices’ Handicap Chase is one of the more recent additions to the Cheltenham Festival, with the race first run in 2005.

A listed National Hunt steeplechase which is open to horses aged five years or older, the Novices’ Handicap Chase is run on the Old Course over a distance of about 2 miles and four and a half furlongs (2 miles, 4 furlongs and 78 yards), and during its running there are sixteen fences to be jumped.

The Novices' Handicap Chase is a handicap race for novice chasers – those horses that haven’t run a race over fences before that season - with a handicap rating between 0 and 145 (this used to be limited to horses with a maximum official rating of 140, but was changed in 2017).

In terms of Timeform ratings, the Novices’ Handicap Chase is often won by a useful performance on Timeform’s scale, but the best winning effort came from Reveillez who beat Copsale Lad in the 2006 renewal.

Reveillez was the only win in the Novices’ Handicap Chase for AP McCoy , and it’s also the only win that owner JP McManus has enjoyed, though he has had three horses finish in the top three places since 2006.

One of those was Bob Hall, who chased home L’Antartique in 2007, the latter one of two wins in the Novices’ Handicap Chase for trainer Ferdy Murphy and jockey Graham Lee.

Their other win came with Divers in 2011, who, incidentally, also beat another McManus-owned horse in the form of Quantititaveeasing .

The northern-based jockey guided the Ian Williams-trained Ballyalton to success in 2016, the horse’s best performance since chasing home Faugheen in the Baring Bingham Novices’ Hurdle at the 2014 Cheltenham Festival, and he also piloted the Mick Channon -trained winner Mister Whitaker in the 2018 renewal of the Novices’ Handicap Chase. The 2019 renewal was won in emphatic fashion by A Plus Tard, who provided Rachael Blackmore with a first Festival winner; his high-class performance was easily the best in the race’s history, and suggested he'd have been a major player in any of the Grade 1 novice events.

The winning ride by Mattie Batchelor in the inaugural Novices’ Handicap Chase won the Lester Award for ‘Jump Ride of the Year’. 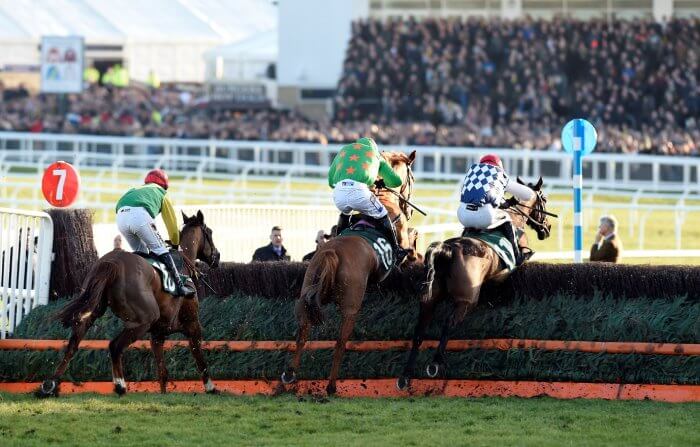 EPSOM DOWNS 13:50
£12.96 Simon & Ed Crisford's profit to a £1 level stake when having one runner at a flat meeting (saddles SAFRA)
24% Simon & Ed Crisford's strike rate in late season (saddles SAFRA)
27% Charlie Appleby's strike rate with horses running in races between 7f and up to 10f (saddles SOVEREIGN PRINCE)
Betting Offers ⇒
To help personalise content, tailor your experience and help us improve our services, Timeform uses cookies. By navigating our site, you agree to allow us to use cookies, in accordance with our Cookie Policy and Privacy Policy.
;