The Mares’ Novices’ Hurdle, also known as the Dawn Run Mares' Novices' Hurdle, is the newest race at the Cheltenham Festival.

First run in 2016, when it expanded the Cheltenham Festival to 28 races, the Mares’ Novices’ Hurdle is a Grade 2 National Hunt hurdle race open to fillies and mares aged four years or older.

It is run on the New Course at Cheltenham over a distance of about two miles and one furlong (2 miles and 179 yards), and horses will jump eight hurdles in total.

The race is for novice mares – those that haven’t won a race over hurdles before that season – and, much like the Grade 1 David Nicholson Mares’ Hurdle, has been dominated by Willie Mullins since its inception.

It’s fitting that the Dawn Run Mares' Novices' Hurdle has been dominated by Willie Mullins, as he is the son of Paddy Mullins who trained Dawn Run, the only horse to ever complete the Champion Hurdle/Gold Cup double.

Limini started the ball rolling when winning the 2016 Mares’ Novices’ Hurdle, though half the field were just making up the numbers.

Limini produced a useful effort when beating Dusky Legend by four and a half lengths, but she had to settle for third when beaten by Apple’s Jade in the David Nicholson Mares’ Hurdle the following year.

Like Limini, the 2017 Mares' Novices' Hurdle winner Let’s Dance was owned by Rich and Susannah Ricci.

Let’s Dance was fourth in the previous year's Triumph Hurdle, and her relative experience for a novice proved advantageous as she prevailed by two and three quarter lengths over the fellow Irish-trained mare Barra .

Though it was the weakest race of the Festival, the heavily-backed winner scored in a fashion that suggests she'd have been competitive in the Supreme Novices’ Hurdle, which would have been a more interesting proposition than this demolition job.

The 2019 edition threw up a surprise winner in the shape of 50/1-shot Eglantine du Seuil, with the 66/1 Concertista following her home, with both mares trained by Mullins.

In terms of Timeform ratings, only a useful effort has been needed to win the Mares' Novices' Hurdle.

Willie Mullins is the only trainer to have won the Mares' Novices' Hurdle, but two jockeys have shared the prizes.

Ruby Walsh is the most successful Mares' Novices' Hurdle jockey, with a brace of wins thanks to Limini (2016) and Let’s Dance (2017), while Paul Townend made the most of Walsh’s absence (had sustained an injury when falling on Al Boum Photo in the RSA Chase) when guiding Laurina to victory in 2018. Noel Fehily, at his final Cheltenham Festival before retiring, won the 2019 renewal on Eglantine du Seuil. 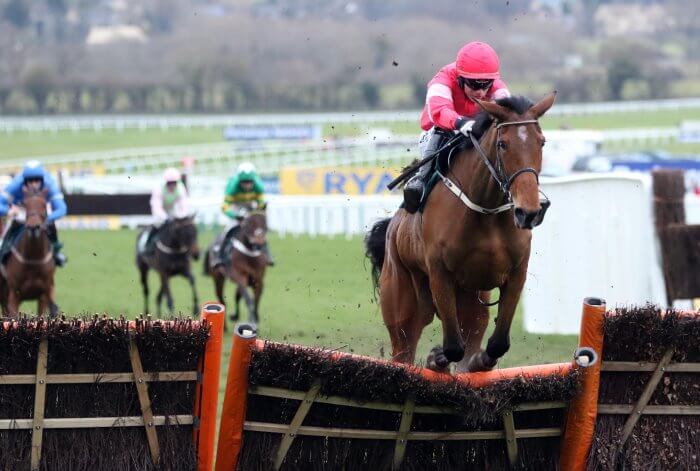