The Coral Cup is a Grade 3 handicap hurdle race, open to horses aged four and older, which is held on Day Two of the Cheltenham Festival, which is traditionally the Wednesday. The race is run over a distance of just over two miles and five furlongs (2 miles, 5 furlongs and 26 yards), with ten hurdles jumped by those taking part, and is widely considered to be one of the most competitive races at the entire festival.

Established in 1993, the race has been sponsored by Coral for its entire history, and was upgraded to Grade 3 status in 1999.

The inaugural winner of the race, the Peter Scudamore-trained Olympian , was awarded a £50,000 bonus by the sponsors for winning the Imperial Cup at Sandown, another highly competitive handicap hurdle race, over two miles, the week before.

The 2008 renewal of the Coral Cup, won by the Ferdy Murphy-trained Naiad du Misselot , had to be switched to the New Course at Cheltenham due to high winds and as a result was run over half a furlong shorter, over two miles and four and a half furlongs.

The race is one of the most competitive races at the entire Festival, and as such the winner regularly returns at a big price, with just one favourite winning the race this century – the Tony Martin-trained Xenophon , who won the 2003 Coral Cup and returned home the 4/1 favourite, ridden by Mick Fitzgerald.

Perhaps the most prestigious winner of the Coral Cup is Whisper , who won the race when trained by Nicky Henderson in 2014, but is now trained by Sam Thomas.

Whisper went on to win the Grade 1 Liverpool Hurdle at Aintree a year later and latterly progressed to become a top-class staying chaser, finishing second to Might Bite in a thrilling renewal of the RSA Chase in 2017.

Dai Walters’ colours were also carried to victory in the 2019 renewal won by William Henry, who flashed home under Nico de Boinville to deny the Willie Mullins-trained Wicklow Brave. That win means that Henderson is now tied with Martin Pipe as the leading trainer in the race (three wins apiece).

The leading jockey in the Coral Cup is Davy Russell , who has won the race three times, with Naiad de Misselot in 2008, Carlito Brigante in 2011 and most recently with Diamond King in 2016. 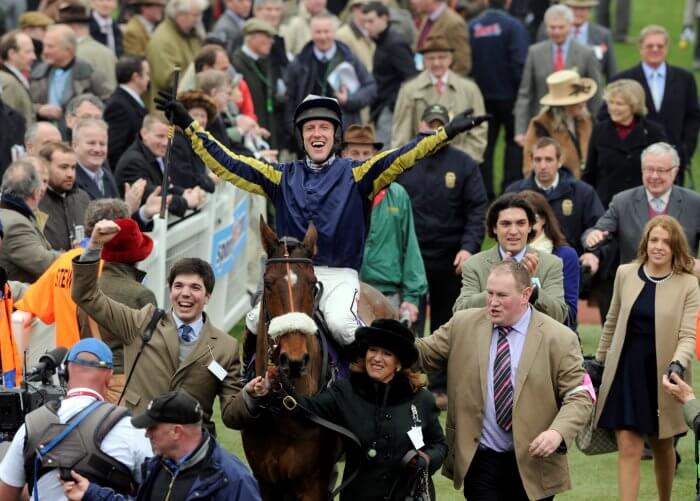 What is the distance of the Coral Cup?

How many obstacles are jumped in the Coral Cup?

What day of the festival is the Coral Cup?

What time is the Coral Cup?

What weights are carried for the Coral Cup?

What is the purse for the Coral Cup?

Who is the leading jockey in the Coral Cup*?

Who is the leading trainer in the Coral Cup*?

Who won the Coral Cup?

You can check out our Coral Cup results page here to see a list of previous winners.

Where can I compare the odds for the Coral Cup?

HEXHAM 12:20
£30.50 John Dixon's profit to a £1 level stake when having only one runner on the card (hurdles) (saddles PISTOL)
Betting Offers ⇒
To help personalise content, tailor your experience and help us improve our services, Timeform uses cookies. By navigating our site, you agree to allow us to use cookies, in accordance with our Cookie Policy and Privacy Policy.
;