The Cheltenham Gold Cup is run on the New Course at Cheltenham Racecourse, over a distances of three miles and two and a half furlongs. There are a total of 22 fences to be jumped.

The first race known as the Cheltenham Gold Cup was run in July 1819, but it was a flat race contested over three miles.

The Cheltenham Gold Cup ran as a jumps race for the first time in March 1924 but did not start with the prestige it now has, overshadowed by the National Hunt Chase.

The original Cheltenham Gold Cup will be presented to the winners of the festival highlight after the racecourse was reunited with the prize in 2018.

The Cheltenham Gold Cup trophy, first awarded 94 years ago, was offered to the course by a private owner who had kept it in a bank vault since the 1970s. It will replace the current Cheltenham Gold Cup, which has been in use since 1972.

The all-time most successful horse in the Cheltenham Gold Cup is Golden Miller, who won it a total of five times across five consecutive years – 1932 to 1936.

Past greats such as Golden Miller, Arkle and Desert Orchid, and modern heroes like Best Mate and Kauto Star, have all tasted victory in this race.

There have been several notable Cheltenham Gold Cup Results this century, including a hat-trick of wins in the race for the Henrietta Knight -trained Best Mate between 2002 and 2004.

Kauto Star became the first horse to regain the Cheltenham Gold Cup when winning the 2009 renewal, two years after landing his first win in the race.

Synchronised received a never-say-die ride from AP McCoy when winning the Cheltenham Gold Cup in 2012, while Native River’s superior stamina won the day in 2018 when he stayed on best of all to deny Might Bite a first ever Cheltenham Gold Cup success.

As well as a class act, Kauto Star was a thoroughly game racehorse and he could never be written off as he showed when still managing to whittle down Denman's advantage in the closing stages of the Gold Cup in 2008, despite also being under pressure a long way out on that occasion.

Denman beat him by seven lengths that day but Kauto Star turned the tables to win the 2009 edition by thirteen from his stablemate, in the process becoming the first horse to regain the Gold Cup (he won from Exotic Dancer in 2007).

Kauto Star is clearly entitled to be regarded as the best steeplechaser for more than forty years.

His thirteen-length victory over Denman in the 2009 Gold Cup was, in Timeform's view, the best performance in the race in that very long period.

There could have been no other choice for the accolade of Timeform Horse of the Year in 2009.

Jim Culloty , who is the top jockey in the Gold Cup this century, has also won it as the trainer of Lord Windermere in 2014.

The longest Cheltenham Gold Cup Odds of any winner was recorded by Norton’s Coin in 1990.

Trained by Sirrel Griffiths and ridden by Graham McCourt, Norton’s Coin surprised nearly everyone at the Cheltenham Festival when winning at Cheltenham Gold Cup Odds of 100/1.

Such was Arkle's perceived superiority before the last of these victories that he was given a starting price of 1/10 (a £10 bet would have won £1).

The runners for this year’s Cheltenham Gold Cup will go to post at 15:30 on the Friday of the Cheltenham Festival.

The Cheltenham Gold Cup field size varies greatly over time, with variants such as ground conditions and quality of opposition taken into consideration.

Arkle is one of the famous names associated with the Cheltenham Gold Cup, but he only beat a total of 10 runners over the three years that he ran in the race.

In contrast, Silver Buck beat 21 other rivals when landing the 1982 renewal of the Cheltenham Gold Cup, the same number that War Of Attrition defeated in 2006.

Recent renewals of the Cheltenham Gold Cup have tended to feature between 13 and 16 runners.

The potential 2019 Cheltenham Gold Cup runners include Presenting Percy , who has won races at the last two Cheltenham Festivals, including the 2018 RSA Chase.

He has been given a sparing campaign this season, but his trainer Pat Kelly is a master at getting his horses to peak at the Cheltenham Festival.

The 2017 King George winner Might Bite , who was second to Native River in the 2018 Cheltenham Gold Cup, has disappointed so far this season and needs to be rejuvenated by a wind operation when heading to Cheltenham in March.

The 2019 renewal finally saw Willie Mullins record a win in the race, as Al Boum Photo – ridden by Paul Townend – got the better of the previous year’s third Anibale Fly, with Bristol de Mai back in third. 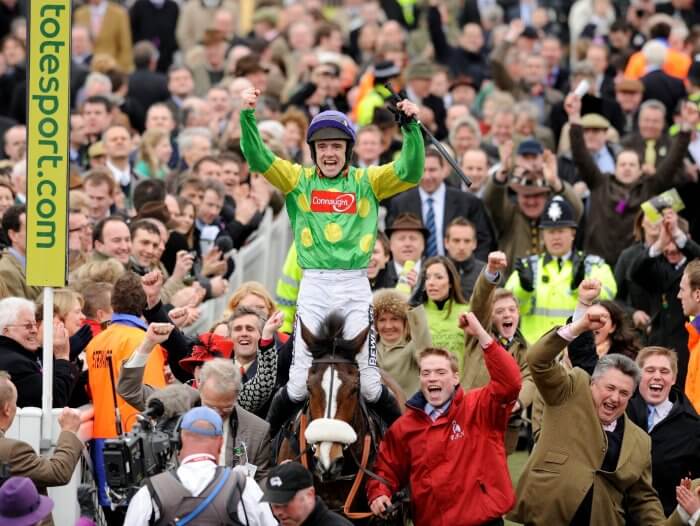