The Cheltenham Festival is split in two: days one and two will be run on the Old Course, days three and four on the New Course. The two courses are both left-handed and essentially stiff in nature, but there are subtle differences that can prove crucial.

The Old Course, used for the Champion Hurdle and Queen Mother Champion Chase , has a slightly shorter run-in and puts the emphasis somewhat more on speed.

The New Course, which hosts the longer Stayers' Hurdle and Cheltenham Gold Cup , puts extra emphasis on a horse’s stamina, which can lead to everything changing as the field climbs the fabled Cheltenham hill.

The Supreme Novices’ Hurdle starts the Cheltenham Festival and sees runners sent off with the famous ‘Cheltenham roar’. The Supreme has an impressive roll of honour, including the likes of Vautour and Douvan, but one of the most notable winners in recent years was the Nicky Henderson -trained Altior, who denied Willie Mullins and Rich Ricci a four-timer in the race in 2016.

The Arkle Challenge Trophy is the race for the top two-mile novice chasers. The Arkle has been won in the past by the likes of Moscow Flyer, Azertyuiop, Sizing Europe and Sprinter Sacre, all of whom went on to land the Champion Chase at subsequent Festivals. Willie Mullins has dominated the race in recent years, including victories for Un de Sceaux, Douvan, Footpad and Duc des Genievres.

The third race on the card is the Festival Handicap Chase which witnessed one of the best rides in Cheltenham Festival history when Wichita Lineman was carried home by A.P McCoy in 2009, and Wichita Lineman’s owner J.P. McManus will likely target one or two at the race again.

McManus has an excellent record in the feature race on the opening day of the Cheltenham Festival, the Champion Hurdle, Epatante giving him a fourth successive victory in the race in 2020, following on from two wins for Buveur d’Air and one for the ill-fated Espoir d’Allen.

The Mares’ Hurdle is one of the newest additions to the Cheltenham Festival, run for the first time in 2008, and has been utterly dominated by Willie Mullins in that time, winning the race eight times in a row between 2009 and 2016, as well as in 2018.

The National Hunt Chase is one of three races at the Cheltenham Festival restricted to amateur riders. Though the distance was reduced slightly after the 2019 running, it is still the longest race of the meeting, run over three and three-quarter miles. It’s another race where Irish trainers have had plenty of success in recent times and Gordon Elliott has won two of the last three runnings, including with Ravenhill in 2020. 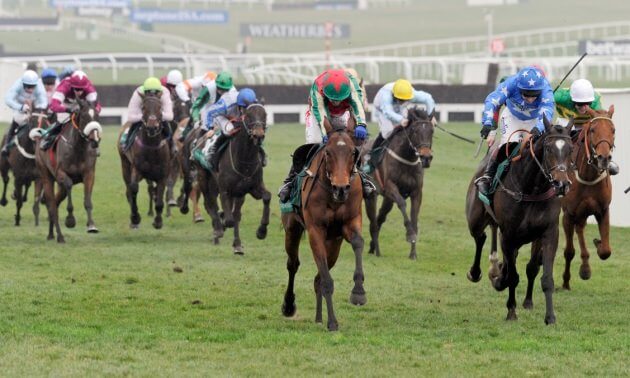 The Ballymore Novices’ Hurdle – formally known as the Baring Bingham Novices’ Hurdle – will open day two of the Cheltenham Festival. It has been won by the likes of Faugheen , Hardy Eustace and the legendary Istabraq in the past, all of whom went on to win the Champion Hurdle at some point in their careers. The 2020 renewal was won by another special horse in Envoi Allen, who extended his unbeaten record to eight’.

The RSA Chase , for the top staying novice chasers, acted as a springboard to Gold Cup success for the Bobs Worth and Lord Windermere in the early-2010s. 2019 winner Topofthegame didn’t run in the 2020 Gold Cup, but Santini – second in that RSA – went close to going one better in the Gold Cup.

The Coral Cup is one of the most famous and competitive handicaps at the Cheltenham Festival and this year’s renewal looks set to continue that trend. The 2020 renewal was won by Dame de Compagnie, representing trainer Nicky Henderson, jockey Barry Geraghty and owner J.P. McManus.’

The Queen Mother Champion Chase is the feature of day two of the Cheltenham Festival and has played host to some dramatic races. Sprinter Sacre recorded an emotional victory in 2016 when regaining his 2013 title, after some well-documented physical issues, beating 2015 Arkle winner Un de Sceaux into second. Altior also recorded a double in the race in 2018 and 2019 but missed the 2020 renewal due to injury

The Cross-Country Chase has produced more than its share of Festival legends, including Garde Champetre and Balthazar King, the latter taking his second Cross-Country Chase in 2014 before going on to finish second to Pineau de Re in the same spring’s Grand National. Tiger Roll used the race as a springboard to Grand National success in 2018 and 2019, but the 2020 running was won impressively by the French-trained Easysland.

The Fred Winter Juvenile Handicap Hurdle is seen as something of a consolation race for the Triumph Hurdle, but is furiously competitive in its own right.

Willie Mullins has saddled the Champion Bumper winner on numerous occasions and Ferny Hollow gave him a tenth success in the race in 2020. Ferny Hollow is owned by the same connections – Cheveley Park Stud – as the 2019 winner Envoi Allen. Champion Bumper contenders can often be seen revisiting the Festival over obstacles for many years to come. 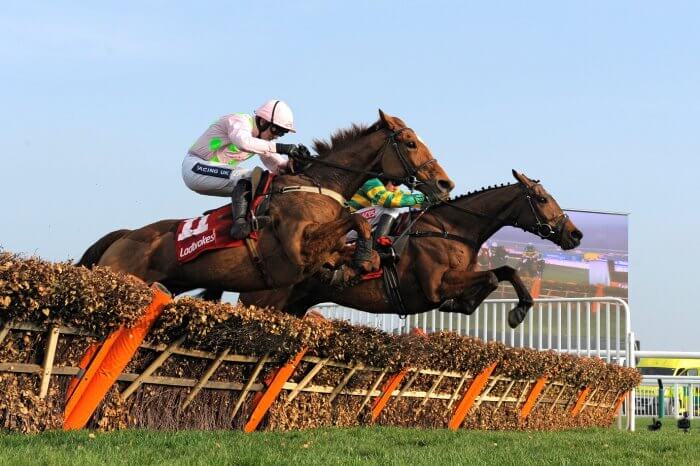 Although only a decade old, the JLT Novices’ Chase (Golden Miller) has already produced high-class winners such as Sir des Champs, Vautour and Yorkhill. Irish horses have dominated the race, with only Taquin du Seuil and Defi du Seuil breaking their stranglehold in 2014 and 2019 respectively.

The Pertemps Final is another typically competitive handicap race at the Cheltenham Festival and is run over the same course and distance as the World Hurdle. Patrick Kelly and Davy Russell won the 2016 and 2017 renewals with Mall Dini and Presenting Percy, respectively, while Russell completed his own hat-trick in the race when guiding Delta Work to victory in 2018. Delta Work’s stablemate Sire du Berlais won the last two renewals.

The Ryanair Chase is run at an intermediate trip, placing it somewhere inbetween the Queen Mother Champion Chase and Cheltenham Gold Cup. Un de Sceaux, Cue Card and Vautour, are some of the most memorable recent winners, while Samcro recorded a popular success for Gordon Elliott in 2020.

The Festival Plate feels like the ‘final’ in a series of races that goes through the BetVictor Gold Cup and Caspian Caviar Gold Cup. British-trained horses have won the last two runnings, Simply The Betts providing Harry Whittington with a first Festival success in 2020

One of the races at the Cheltenham Festival restricted to amateur jockeys, the Fulke Walwyn Kim Muir has been the Festival’s main Grand National trial in recent years. Cloudy Lane, Junior, Ballabriggs and Sunnyhillboy have all been fancied at Aintree the year after winning the Kim Muir. 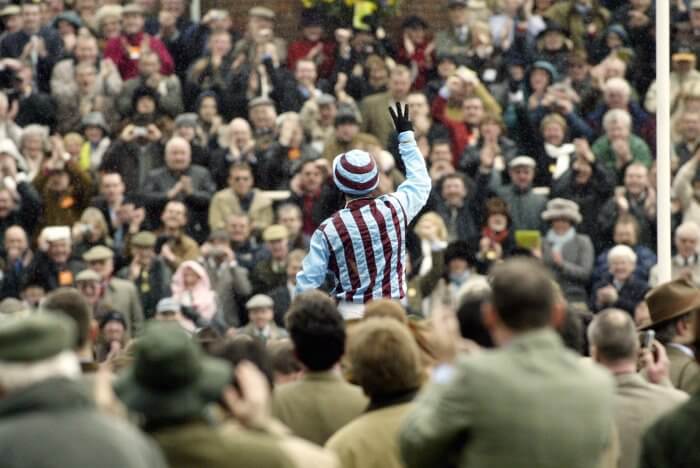 The Triumph Hurdle kicks off the final day of the Cheltenham Festival. A race restricted to four-year-olds, it has been won by the likes of Katchit, Zarkandar, Our Conor and Defi du Seuil this century. Nicky Henderson is the leading trainer in the race with seven wins, the most recent of which came with Pentland Hills in 2019.

The County Hurdle is one of the most competitive handicaps at the Cheltenham Festival but has been dominated by just two trainers since 2015, Willie Mullins and Dan Skelton. Skelton won the 2019 renewal with Ch’tibello but it was Mullins’ turn again in 2020, taking the race with the gambled-on Saint Roi, who could even end up making up into a Champion Hurdle contender in future.

The Albert Bartlett Novices’ Hurdle , known formally as the Spa, was won in 2011 by subsequent Cheltenham Gold Cup winner Bobs Worth. Run over a distance of three miles, it is the premier staying event for novice hurdlers at the Cheltenham Festival, though can sometimes throw up a shock result, Kilbricken Storm (33/1) and Minella Indo (50/1) winning at big prices in recent seasons. The 2020 winner Monkfish – trained by Willie Mullins and owned by Rich Ricci – was a fair bit easier to find in the market, however.

The Cheltenham Gold Cup is the highlight of the Cheltenham Festival and the most prestigious race of the entire Jumps season. Past greats such as Golden Miller, Arkle and Desert Orchid, and modern heroes like Denman and Kauto Star have all tasted victory in this race. In 2020 Al Boum Photo became the first dual winner of the Gold Cup since Best Mate, who recorded a hat-trick in the race in the early-200s. Whilst in 2021 Rachel Blackmore became the first female jockey to win the Gold Cup riding Minello Indo. Blackmore was also the first woman to claim the top jockeys’ award riding six winners during a phenomenal week.

The Foxhunter Chase , contested over the same course and distance as the Cheltenham Gold Cup, is limited to amateur riders. Nina Carberry tasted victory for the second year in succession aboard On The Fringe in 2016, with Olympic gold medal-winning cyclist Victoria Pendleton a well-documented fifth on Pacha du Polder. That horse went on to win the 2018 renewal and was a lot better fancied than the 2020 victor It Came To Pass, who was sent off at 66/1

Run in the name of Johnny Henderson (Nicky’s father) since 2005, the Grand Annual is the final event of the Cheltenham Festival and has been won by Nicky Henderson in 2006 and 2012. Paul Nicholls is the leading trainer in the race, though, with four wins, his latest coming in 2018 with Le Prezien , though he had to settle for fourth in the 2020 renewal, the Gordon Elliott-trained Chosen Mate leading home an Irish 1-2-3.

The Martin Pipe Handicap Hurdle , for conditional jockeys, is now the final race of the Cheltenham Festival and is run in the name of the 15-time champion trainer who saddled no fewer than 34 Cheltenham Festival winners. His son David Pipe is yet to win the race, Irish trainers – Willie Mullins, Gordon Elliott and Joseph O’Brien – dominating the race in recent years, though Paul Webber pulled one back for the British when Indefatigable won the 2020 renewal. 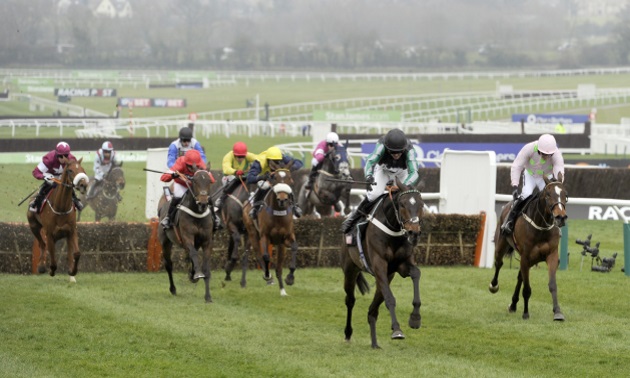 As well as the Cheltenham Festival, Cheltenham Racecourse stages a number of other fixtures during the course of the National Hunt (also known as the Jumps) season.

The Showcase Meeting takes place in late-Oct. The exciting two-day meeting sees a host of new racing recruits join the ranks - from trainers and jockeys to future equine stars and sets the tone for what's to come, leading all the way to The Festival in March.

The November Meeting, as its name suggests, takes place in mid-November, although it was called the Open Meeting until recently. That name was changed due to some confusion between the Open Golf Championship. The November Meeting’s big race is the BetVictor Gold Cup, and provides one of the most exciting racedays of the season.

The International Hurdle is one of the big races at the December meeting which uses the race’s name, while the International Meeting also offers the cross-country specialists a chance to shine in the Crystal Cup, a race that concludes a series of unique races across Europe which encapsulates and celebrates the rich heritage of the sport. The meeting also includes the Caspian Caviar Gold Cup Handicap Chase.

The action on New Year's Day hosts seven quality races, including two Grade 2s with trainers, jockeys and racegoers all hoping to get their year off to a flyer, while Festival Trials Day at the end of January helps punters and trainer finalise their choices for the big one at the Festival. The racing highlight of Festival Trials Day is the Cotswold Steeple Chase, often considered a trial for the Gold Cup in March.

Following the thrill of the Cheltenham Festival, the following month’s two-day April Meeting provides a final chance for racegoers to see their favourite horses and jockeys before the summer break. The feature event is the Grade Two Silver Trophy Chase.

BATH 13:10
£10.83 John O'Shea's profit to a £1 level stake with favourites (saddles MONSIEUR FANTAISIE)
£101.69 John Gallagher's profit to a £1 level stake when having one runner at a flat meeting (saddles SILVER DIVA)
Betting Offers ⇒
To help personalise content, tailor your experience and help us improve our services, Timeform uses cookies. By navigating our site, you agree to allow us to use cookies, in accordance with our Cookie Policy and Privacy Policy.
;