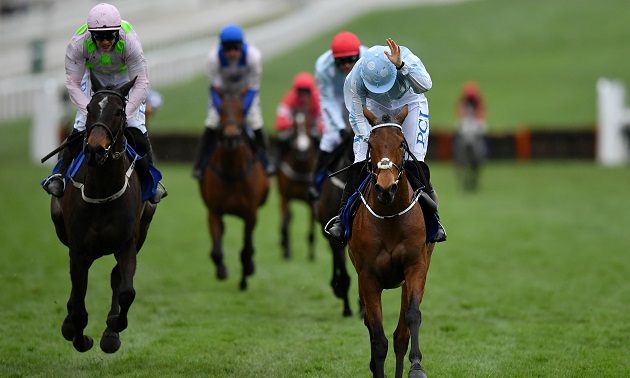 There was a thrilling conclusion to last year’s David Nicholson Mares’ Hurdle as Honeysuckle gamely fended off a persistent challenge from Benie des Dieux, with both mares running to a level that would have made them big players in championship races against the males.

Only half a length separated the pair at the line and it’s possible to make a case that Benie des Dieux was an unlucky loser having been forced a little wide as the race was taking shape after the second-last, while Honeysuckle and Rachael Blackmore secured a dream run up the inside after Stormy Ireland – a stablemate of Benie des Dieux’s – edged off the rail.

Benie des Dieux, a thorough stayer, was also not so well suited by a dash as her younger rival, who had won the Irish Champion Hurdle on her previous start, so she was by no means disgraced in second.

A fabulous finish to this year's Close Brothers Mares' Hurdle as she fends off Benie Des Dieux to retain her unbeaten record.#CheltenhamFestival #85DaysToGo #GreatFestivalMoments pic.twitter.com/CHrrUnY2eQ

Benie des Dieux would be entitled to plenty of respect if tackling the Mares’ Hurdle – which she won in 2018 and was set to take in 2019 but fell at the last – but the new Mares’ Chase and the Stayers’ Hurdle are both viable options, particularly as trainer Willie Mullins looks to have another strong candidate for this in Concertista.

Concertista has gone from strength to strength since running out a wide-margin winner of the Dawn Run Mares’ Novices’ Hurdle at last year’s Cheltenham Festival, picking up where she left off by recording an impressive victory at Fairyhouse in November before completing the hat-trick with her best performance yet at Leopardstown, where she comfortably got the better of the front-running Minella Melody. She is on the up and could still have a bit more to offer but has a bit to find on ratings with Honeysuckle, who would provide a much stiffer test.

Honeysuckle is still unbeaten after nine start under Rules and she picked up her fifth Grade 1 when landing the Hatton’s Grace Hurdle - for the second time – on her reappearance in November, benefiting from another canny ride from Blackmore that utilised the mare’s speed. She is reportedly set to defend her Irish Champion Hurdle crown at Leopardstown in February, and this wonderfully consistent mare will continue to take all the beating wherever she turns up.

Honeysuckle holds a Champion Hurdle entry – as does Concertista – and she would not look out of place if lining up in that race.

Roksana took advantage of Benie des Dieux’s late exit to land the Mares’ Hurdle in 2019 but she was only fourth last season, essentially put in her place by more talented rivals in Honeysuckle and Benie des Dieux, for all that she was not ideally positioned when the dash for home developed.

Roksana proved at least as good as ever on her return to action at Wetherby in October, relishing the return to three miles as she ran out an easy winner, and she ran almost as well to finish third to Paisley Park and Thyme Hill in the Long Walk Hurdle at Ascot in December, sticking to her task admirably. She is probably better over three miles and the Stayers’ Hurdle looks a more suitable option.

This is a difficult race to tackle from an ante-post perspective given the other options open to the leading players, and, as such, it could be worth waiting before getting involved. Last year’s winner Hoenysuckle will take all the beating if lining up having put together an impressive unbeaten sequence, but connections also have the Champion Hurdle as a viable alternative.