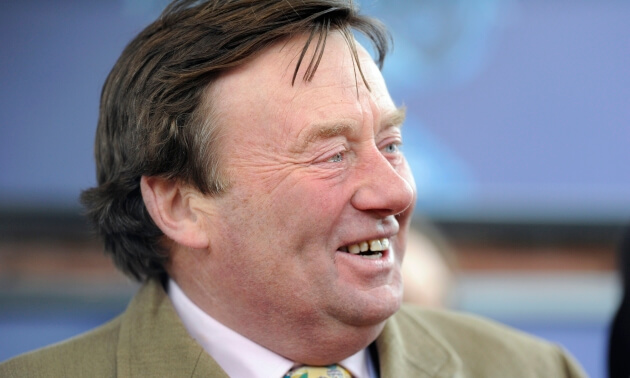 Shishkin moved up the pecking order at Nicky Henderson's yard and thrust himself into the picture for the Cheltenham Festival when forming the highlight of a treble for Nico de Boinville at Newbury.

After suffering a fall on his debut over hurdles at the track last month, the six-year-old made amends as he showed a smart change of gear late on to run out an 11-length winner of the MansionBet Proud To Sponsor British Racing Novices' Hurdle.

Running in the colours of Gold Cup hero Al Boum Photo, the Joe Donnelly-owned Shishkin was cut to 10-1 for the Supreme Novices' Hurdle by Coral, while Betfair went 16-1 and then 10-1 for the same race and 20-1 for the Ballymore.

"Was clearly none the worse for his early spill here last month and looked a natural jumper this time, clearly with plenty of talent to go with it. Jumping fluently and travelling strongly, he loomed up soon after 3 out and was produced to lead soon after the last, quickening clear strikingly. He looks a really exciting prospect, a step up in grade surely on the cards now."

Henderson said of his 7-4 winner: "He is smart. It was just unfortunate what happened here first time.

"As Nico said, it was liked he learned something - he was quite gassy then and he was trying to take the world on, as he is enthusiastic as well.

"Today he was just beautifully relaxed and never touched a hurdle.

"I think to do that in that ground was good, as not many horses quicken out of that, so you would have to be impressed. He has got gears."

Assessing Shishkin's future plans, Henderson hinted a step up to two and a half miles could be on the cards.

He said: "You'd better think about the Ballymore as well, as I won't promise it will be the Supreme as Nico thought another half a mile might help him. I would like another run.

"It's experience that I want and I wouldn't be frightened of finding a nice little race. That would do well (the Sidney Banks at Huntingdon). Timing is about right from mid-Jan to mid-Feb to March, I would think."

Bond's Lover (10-1) provided Henderson and De Boinville with further success, grinding out victory by a neck to make her debut under rules a winning one in the British EBF Mares' "National Hunt" Novices' Hurdle.

Henderson said: "She has been in Ireland a long time growing and had one run in a point-to-point last year. I'm not surprised she went in the ground, but I'm surprised she won as she was a wild child when she arrived."

Former trainer Henrietta Knight made it clear she feels Your Darling is the best she has bought since triple Gold Cup winner Best Mate - and there was much to like about his victory in the Premier Food Courts Standard Open National Hunt Flat Race.

She said: "This is as good a horse as Best Mate. I bought him in Ireland from the same place.

"I think he could be top class, as I know the family well. I had been watching the horse all the time in Ireland, but I had a hell of a job getting him."

Winning trainer Ben Pauling heaped further praise on the 9-2 shot, whose victory completed De Boinville's treble but foiled a hat-trick for Henderson, as Flinteur Sacre - a full-brother to the great Sprinter Sacre - had to settle for second.

Flinteur Sacre, a full-brother to the great Sprinter Sacre, shaped with plenty of promise in 2nd, travelling well and running a bit green late on.

Pauling said: "I think this is a proper horse and is probably as good as I've had. I think a huge amount of Bright Forecast and this lad is up there with him. It is a long time since I've had a bumper horse like this."

Ben Jones celebrated his first Newbury winner since steering De Rasher Counter to glory in the Ladbrokes Trophy in November with a facile victory aboard the Philip Hobbs-trained Le Ligerien (2-1) in division one of the EBM Handicap Hurdle.

Jones said: "Our only doubt was if he would handle the ground. To be fair he did and he jumped like a buck and made my job very easy."