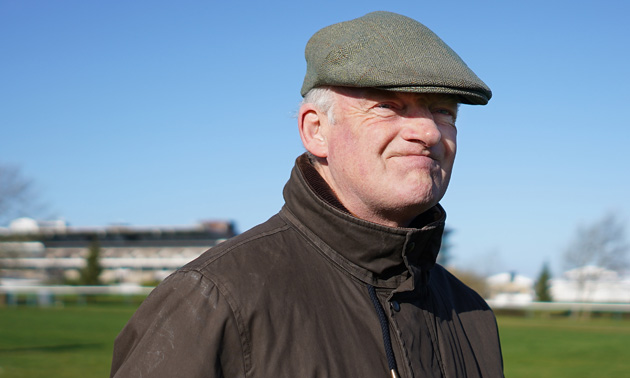 The Irish Arkle could be next on the agenda for Energumene after he maintained his unbeaten record over fences with an impressive display at Naas.

Having already won a point-to-point, a bumper and on his sole start over hurdles, the Willie Mullins-trained seven-year-old made a smart start to his novice-chasing campaign when registering a wide-margin victory at Gowran Park in November.

The French-bred gelding faced a tougher test in the Irish Stallion Farms EBF Novice Chase, with Henry de Bromhead’s high-class performer Captain Guinness among his three rivals, but he ultimately got the job done in fine style.

Sent straight to the lead by Paul Townend, 10-11 favourite Energumene jumped accurately throughout to keep the pressure on those in behind.

Captain Guinness closed the gap rounding the home turn and briefly looked set to make a race of it, but the market leader asserted between the final two fences and pulled clear on the run-in to score by eight and a half lengths.

The winner’s stablemate Blackbow was a long way behind in third.

ENERGUMENE makes all under Paul Townend to make it 2 from 2 over fences with victory in the Novice Chase at @NaasRacecourse!

Mullins said of the winner: “That was very impressive, and his jumping was a key factor. He’s got a great method to jump.

“I brought him back to two miles to see if he would be as effective. He loves jumping.

“That was very testing going, and (he was) making all his own running. Paul just gave him a breather turning for home, and he’s picked up again. I was very taken with it.

“I’d imagine we will go down the two-mile route now, and the Arkle at Leopardstown would look the place to go.”

Paddy Power cut Energumene to 5-1 from 12-1 for the Arkle Trophy at Cheltenham in March, making him their clear second-favourite behind Shishkin.