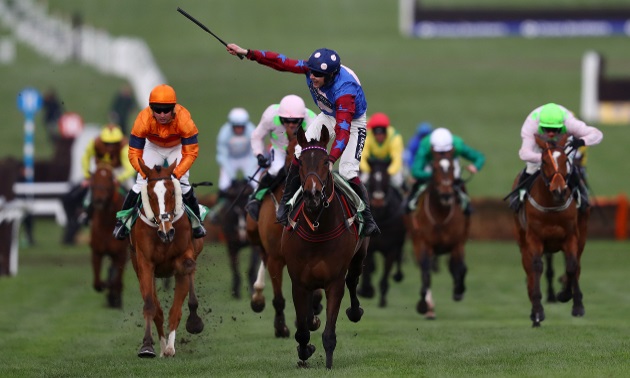 Last year's winner Paisley Park features among 40 entries for the Stayers' Hurdle at the Cheltenham Festival.

Emma Lavelle's stable star was the dominant figure in the three-mile division last year, winning all his five starts.

His unbeaten sequence culminated in victory over Sam Spinner at the 2019 Festival and he made a good start to the present campaign in the Long Distance Hurdle at Newbury in November.

Paisley Park was set to defend his crown in the Marsh (Long Walk) Hurdle at Ascot in December, but was a late absentee on the day of the race due to the testing conditions.

The main home threat to Paisley Park on March 12 could come from Harry Fry's If The Cap Fits, whose only attempt at the trip resulted in a thrilling win in the Ryanair Stayers Hurdle at Aintree. He made a successful reappearance in the Coral Hurdle at Ascot.

Tom George has two strong entries in Marsh Hurdle scorer The Worlds End and Summerville Boy, winner of the Relkeel Hurdle at Cheltenham.

Ireland's 19 possibles include the 2018 winner Penhill, one of seven contenders for Willie Mullins. Other names to note for the Closutton handler are top-class mares Benie Des Dieux and Laurina, as well as 2019 Supreme Novices' Hurdle victor Klassical Dream.

Mouse Morris is hoping Sams Profile can stake his claim for staying honours at Gowran later this month.

"We were thinking about going chasing with him, but he had a slight setback so we decided to stay over hurdles for this season.

"I would hope he could have a lively chance if he went there, but we will see how he goes in the Galmoy first."

2019 heroine Roksana, trained by Dan Skelton, is among 36 entries for the David Nicholson Mares' Hurdle on March 10.

A dark horse among the entries could be Relegate, who is now with Colm Murphy, best known as the trainer of 2006 Champion Hurdle hero Brave Inca and 2010 Queen Mother Champion Chase victor Big Zeb.

Previously trained by Mullins, Relegate captured the Weatherbys Champion Bumper in 2018 but failed to scale those heights last season.

Murphy, who returned to the training ranks in May, said: "Relegate is coming along nicely now. We have had a few stops and starts, which meant she wasn't out over Christmas, but we have had a clear run for the last month or so.

"All being well, she will start off at the Dublin Racing Festival in a handicap hurdle. We have put a lot of work into her jumping, as it was letting her down during her novice season. It will have to improve, but we hope that it will.

"She will have plenty of options at Cheltenham and I suppose we will be guided by how she gets on at the Dublin Racing Festival."