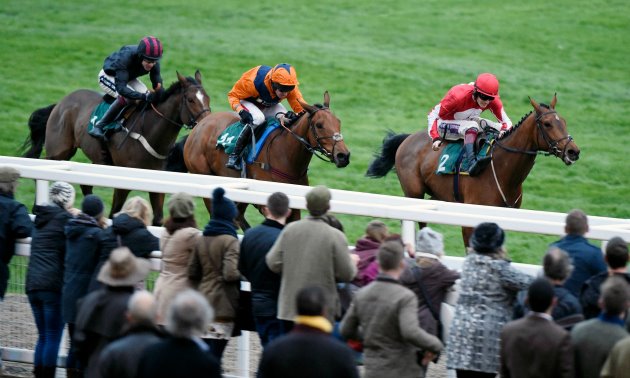 Fayonagh came from last to first to land the Champion Bumper at the 2017 Cheltenham Festival.

Click here for all the results from the 2017 Cheltenham Festival

Gordon Elliott’s dream start to the Festival continued in the Champion Bumper with 7/1 chance Fayonagh coming from last place to give the trainer his fifth winner of the meeting.

Poorly away from a standing start, the mare still had plenty of rivals to pass in the straight but stormed home under Jamie Codd, earlier successful in the cross-country chase, to beat Debuchet (10/1) by a length and a quarter. The runner-up had been the first to strike for home, while another length and a half away in third was 22/1 shot Claimantakinforgan.

The plan nearly unravelled at the start, when Fayonagh was left flat-footed, knocked sideways and then set off behind the field. Elliott said: "I wanted to run onto the track and tell Jamie to pull up."

Yet she flew up the hill at the finish to win by one and a quarter lengths and one and a half lengths from Debuchet and Claimantakinforgan.

Elliott said: "Jamie gave her a great ride - she must be tough. The start was something else. Jamie bought her and recommended she be sent to me. I was worried about the ground, and she just stood at the start [a standing start took place following a false start]. That was a pity because she jumps brilliant.

"She's schooled over hurdles, but if she never does anything else it won't matter because she's won a Listed bumper and now a Grade One bumper. She could be a filly to run on the Flat, too, possibly at Royal Ascot."

Mark Gittins, the son of Maura and Edward, and son-in-law of retired top jockey Mick Kinane, said: "My parents [who are breeders of racehorses] love National Hunt racing, while I would be pushing more towards the Flat. Jamie was at the sales, picked this mare out, and rang to say 'I've seen a lovely Kalanisi mare that would suit you'.

"My father is from Liverpool, and so they wanted a mare to run in the [Listed] mares' bumper at Aintree. The plan was to go to Sandown and then Aintree, until Jamie said we should come here. She showed an unbelievable turn of foot out there, yet going past the stands I thought she had no chance."

Spokesperson for Betfair, Katie Baylis said: “With five winners on the board already and some of his big guns still to come, Betfair have decided to pay out early on Gordon Elliott to be top trainer at Cheltenham.”

Click here for all the results from the 2017 Cheltenham Festival