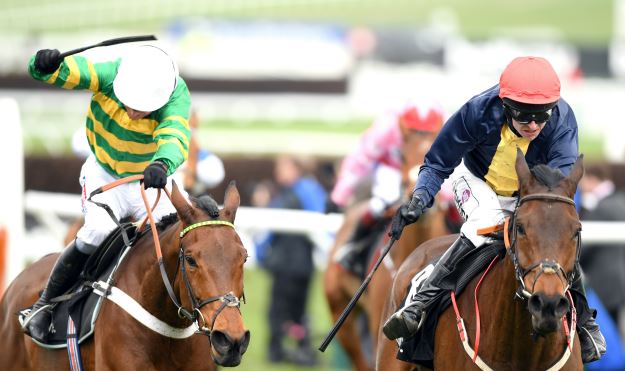 The seven-year-old provided his trainer with a first victory at the showpiece meeting last season - when seeing off Nicky Henderson's Champ, among others, in the Ballymore Novices' Hurdle.

He made a disappointing start to his career over fences when pulled up at Leopardstown over Christmas - and having performed only marginally better to finish a distant second to Carefully Selected at Punchestown last month, connections decided to revert to the smaller obstacles for a tilt at the Paddy Power Stayers' Hurdle.

Brassil is under no illusions about the task facing City Island against the odds-on favourite and defending champion Paisley Park, but he hopes his stable star will bounce back to his best in the Cotswolds.

Mark Walsh is at it again!

He guides CITY ISLAND to victory in the Ballymore Novices' Hurdle at the #CheltenhamFestival!

"It's all systems go for the Stayers' Hurdle. He seems in very good form," said the Dunmurray-based trainer.

"I know the chasing hasn't gone to plan, but we're very happy with him and we know he likes Cheltenham.

"It will be a good race, but hopefully he'll go back there and run well."

City Island is likely to be joined on the trip across the Irish Sea by stable companions Longhouse Poet and You Raised Me Up.

Longhouse Poet was last seen finishing third behind Latest Exhibition in Grade One company at Leopardstown's Dublin Racing Festival, with You Raised Me Up occupying the same finishing position in the ultra-competitive Ladbrokes Hurdle on the same afternoon.

Brassil added: "I was very happy with Longhouse Poet's last run - and all being well, he'll go to Cheltenham. That's the plan.

"He's in the two races, the Ballymore and the Albert Bartlett. At the moment we'd be favouring the two-five (Ballymore), mainly because we think we have a better chance of getting soft ground on the Wednesday than the Friday.

"There'll be lots of good horses up against him, but I hope he's improving and that he'll run a good race.

"I thought (You Raised Me Up) ran very well, considering it was his first run in a handicap, and he's come out of it well.

"We'll enter him in the three races in Cheltenham - the Coral Cup, the County Hurdle and the Martin Pipe. We'll see what sort of mark he gets in England compared to his Irish mark.

"Those would be my three for Cheltenham this year. I hope they all have chances - there'd be no point taking them otherwise."

HUNTINGDON 13:41
21% Kim Bailey's strike rate at HUNTINGDON since the start of the 2014/15 season (saddles LADY OF THE NIGHT)
£10.92 Olly Murphy's profit to a £1 level stake with hurdling debutants (saddles DEL DUQUE)
21% Harry Fry's strike rate with hurdlers at up to 2m2f (saddles SHALL WE GO NOW)
Tweets by @Timeform