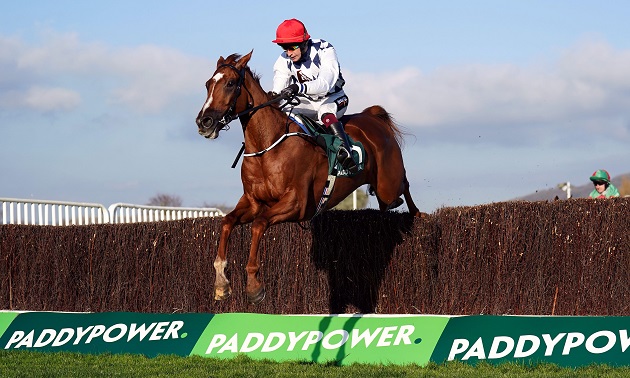 Andrew Asquith looks ahead to the 2023 Arkle and picks out his best ante-post bet.

The 2023 Sporting Life Arkle is shaping up to be a cracking renewal and it is the Nicky Henderson-trained Jonbon who is currently a short price at the head of the betting. He finished runner-up in the Supreme Novices' Hurdle last season before going on to win a first Grade 1 in the Top Novices' Hurdle at Aintree on his next start, edging out El Fabiolo by a neck.

Jonbon always left the impression he would develop into a better chaser, though, and he could hardly have made a better impression in this sphere so far this season, winning both of his starts, and looking a top-class prospect when giving Boothill an eight-length beating in the Henry VII Novices' Chase at Sandown last month. He produced a faultless display that day, his jumping accurate and fast, and he had plenty left in the tank after jumping the last to storm clear on the run-in. Jonbon (who was tipped at 10/1 in our long-range preview following last year's Festival) deservedly heads the betting, but it's difficult to get excited about his current odds.

El Fabiolo is just one of an army that Willie Mullins has entered and he created a good impression on his chasing debut when bolting up by 19 lengths in a maiden at Fairyhouse just before Christmas. Admittedly, he started the 5/1-on favourite that day, so was entitled to win as he did, but that performance was also backed up by the clock and he looks very exciting. There is room for improvement in his jumping, but he could hardly be in better hands, and you'd expect him to run at the Dublin Racing Festival next. Another good performance there will see his odds contract further and he commands maximum respect.

Dysart Dynamo is another who produced an electric display on his chasing debut for Mullins, scoring by 28 lengths at Leopardstown. Again, he was a short price, but he really impressed with his jumping, seeming to give his fences much more respect than he did hurdles, and he also settled better than usual which is very encouraging. He clearly has a massive engine and out of all of Mullins' entries you can safely say he is an out-and-out two miler. Mullins will surely get another run into him before Cheltenham too and he is one you can see starting a much shorter price than the current 9/2 on offer.

Appreciate It was one of the best novice hurdlers around in the 2020/21 season, notably winning the Supreme Novices' Hurdle by 24 lengths, though injury resulted in him only seeing the track once last season in the Champion Hurdle. He has always been a chaser on looks, however, and he has completed a couple of simple tasks in style over fences recently.  He was left with very little to beat when his main rival departed early on at Naas last time, but there was still plenty to like about how he went about his business, his jumping already most assured. Appreciate It is the only horse in the Arkle that still has the Timeform Large P attached to his rating, symbolising he remains open to significant improvement, and he further strengthens Mullins' hand.

Saint Roi and Sir Gerhard are a couple others who need a mention for the Mullins team. The former never really reached the levels he threatened to over hurdles, but he has made a promising start to his chasing career, finishing runner-up to Fil Dor (when conceding 8 lb) on his debut before overturning that form on revised terms in the Grade 1 Racing Post Novices' Chase at Leopardstown last time. However, he doesn't strike me as a natural chaser (he isn't overly big) and will likely prove vulnerable at Cheltenham.

Sir Gerhard is harder to get an angle on as he suffered a setback earlier in the season and we are yet to see him. He does hold an entry at Gowran next week in a beginners' chase, and has multiple entries at the Dublin Racing Festival, too, so his reappearance may be imminent. Sir Gerhard is entered in five races at the Cheltenham Festival at this stage, though, and given he won the Ballymore Novices' Hurdle over two miles and five furlongs last season, he may be one for the intermediate novice chase.

One horse who looks overpriced at this stage is the Joseph O'Brien-trained Banbridge, who won the Martin Pipe at last year's Festival, and has made a bright start to his career over fences. He made a winning start in this sphere with any amount in hand, but he really impressed when following up at Cheltenham in November, having no problem with the drop back to two miles and jumping his rivals into the ground. He wasn't in the same form when beaten by Mighty Potter in the Drinmore Novices' Chase at Fairyhouse last time, but it wouldn't be wise to judge him too harshly on that display, as he didn't settle back over a longer trip and also didn't seem suited by more testing ground. Banbridge looks more of a two-miler over fences and you do need to stay well to win an Arkle, too. His jumping will continue to stand him in good stead and he is worth backing each-way at around 25/1.

Back Banbridge each-way at 25/1 in the Arkle