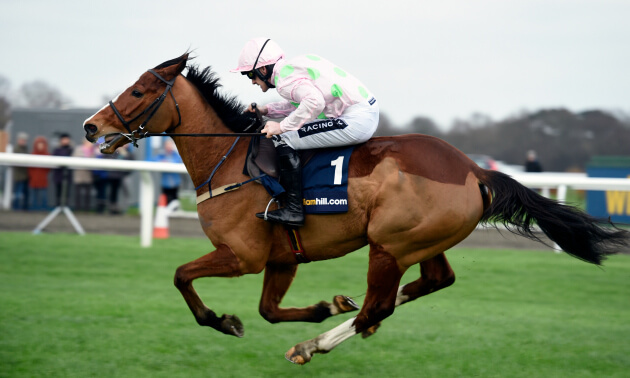 Andrew Asquith looks ahead to the 2023 Supreme Novices' Hurdle and highlights some of the key contenders.

The Supreme Novices’ Hurdle, for many, is one of the most exciting races of the week, and raises the curtain of the Cheltenham Festival. This year racing fans were treated to an outstanding spectacle as Constitution Hill put up the best performance by a novice hurdler in Timeform’s history and, while it is unlikely that we will see a display such as that one in 12 months' time, there are still several interesting types towards the head of the ante-post betting.

The Champion Bumper is the obvious place to start and, Facile Vega, this year’s winner, has been put in as the 3/1 favourite for the 2023 Supreme. He looks an excellent prospect for novice hurdles, his looks matching his pedigree, and he maintained his unbeaten record under Rules with a three-and-a-half-length defeat of his main market rival American Mike in smooth fashion. In terms of form, he is one of the best of Willie Mullins’ 12 winners in the Champion Bumper, and he is bred to improve further once tackling obstacles.

American Mike did all that he could, also confirming himself a smart prospect for novice hurdles next season. He travelled well throughout the contest and found himself in the lead around four furlongs from home, but he didn’t have an answer for the winner once he was passed entering the straight, though he stuck to the task well, and was comfortably on top of the third at the line. American Mike strikes as one who may well be suited by further once sent hurdling, though, and he is generally a shorter price for the Ballymore over two and a half miles.

As you would expect, the head of the ante-post market at the time of writing is saturated with Mullins’ contenders, though one of them, Mercurey, didn’t take his chance at the Festival. Still only a four-year-old, Mullins was keen not to give him to hard of a race at Cheltenham given that horses of his age haven’t got a great record in the Champion Bumper (Cue Card is the only four-year-old winner since 1995) and that decision may pay dividends in the long run.

He is more speedily bred than Facile Vega – out of a mile and a quarter winner on the Flat – but he was impressive when making a winning start in a bumper at Gowran in January, and his starting price that day (100/30-on) suggests he is well thought of at home. A glowing report from his high-profile owner several days beforehand probably contributed to those odds, too, but Mercurey did all the talking for himself on the track, always travelling powerfully and putting the race to bed in a matter of strides once asked to quicken. There’s no doubt he’s an exciting prospect.

Redemption Day was one of the disappointments for the Mullins team in the Champion Bumper, finishing well beaten and failing to build upon the abundance of promise he showed on his debut at Leopardstown. He was one of a few to stay on the inside coming down the hill, but the third was also there, and for now that run can be put down to a bad day at the office. Redemeption Day beat a subsequent winner on his debut – who finished in front of him at Cheltenham – and he is well worth another chance next time, while his pedigree is another ongoing recommendation.

Gaelic Warrior was one of the talking horses heading into this year’s Cheltenham Festival and he was narrowly denied victory in the Boodles Juvenile Handicap Hurdle by Brazil. Despite being unable to land a sustained ante-post gamble, Gaelic Warrior still emerged with plenty of credit, moving through the race like the best long-term prospect but a lack of experience was seemingly his undoing.

Whether or not he will develop into a Supreme type is up for debate as connections were talking about him as more of a staying type of the future, but he remains a horse to be very positive about.

Constitution Hill only made his debut several months before the Festival, and there could be any amount of lurkers we have yet to see on the track. However, Mercurey strikes as a horse with bags of ability and one that should take high rank among next season’s novice hurdlers, so it's worth getting him on side at 16/1 to small stakes.